The Story Behind the Legend 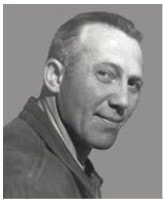 It all began in 1943, with my grandfather, Jack Platt, a lure manufacturer and avid fisherman from Winnipeg. Jack loved to fish! He took fishing trips to remote lakes in Manitoba, organized fishing derbies, and often provided everyone with lures to fish with. Through experimenting and testing, hard work and dedication, he built his reputation as a leading designer of quality fishing lures.

During his 43 years of tackle production, Jack designed many successful lures. His first were hand-carved and hand-painted wooden lures he called the "Platt Plug". In 1951, he developed a popular and successful Walleye Spinner which was a weight-forward casting and trolling lure with red beads, a spinner blade, and a colourful, feathered fly hook. He created his own moulds and perfected the jig making process. He also designed and produced a unique sinker, metal stringers, and a still-fishing leader that acted as a spreader to hold two snelled hooks for bait.

In 1953, he bought a small 10-ton press and began making metal lures. Punched one at a time, each was held between 5 and 8 times before it was completed and ready for market.

Jack successfully designed his lures for specific types of fishing conditions. The Kenokee Flasher targeted pond trout; a heavy brass lure called the Norseman was designed especially for fast white water; the Lunker, a heavy sleek blade, deadly for Lake Trout, and the Wiggle Devil, his most famous metal spoon.

As with all of his lures, he tested the Wiggle Devil, perfecting the design and re-tooling the dyes, until he achieved the "perfect" wobble. He asked his fishing buddies to try the "new" spoon and in no time it was attracting much attention. He began to receive so many requests for it that soon Wiggle Devil took up all of his available time and became his signature and most recognized lure.

As Wiggle Devil's ability to catch fish became known, and as its reputation spread, it became a popular choice for anglers throughout central and northern Canada. By the 1960's Platt was producing as many as 40,000 per year and marketing them through Eaton's, The Hudson Bay Company, Sidney I. Robinson, and Marshall Wells. To many, the 1950's Wiggle Devil still rates as the best lure ever made.

PLATT LURES
Shipping and Payments - FREE local delivery within Winnipeg. There is a $15.00 minimum charge for domestic shipping within Canada. Please allow approximately 4-7 business days for delivery. We accept Visa, Visa Debit, Mastercard and AMEX.
​
Return policy - If the product you have ordered is not what you expected it can be returned. The returned product must be unused and in its original packaging within 30 days. The refund does not cover the original cost of shipping from Platt Lures or the cost of shipping the return.
​